October 8, 2021 | Staff at the University of Arkansas Simulation Education Centers for the Medical Sciences (UAMS) spent the week of September 13 highlighting Arkansas’ problematic maternal and fetal mortality rates while sharing the efforts of UAMS to reduce this number.

To simultaneously commemorate Healthcare Simulation Week 2021, showcase UAMS’s efforts, and bring attention to a serious issue in Arkansas, Karen J. Dickinson, MD, assistant professor of surgery and director of simulation of interprofessional education and clinical skills training, came up with a fun plan of social media posts centered around a maternal health theme.

Healthcare Simulation Week celebrates healthcare professionals around the world who use simulation to improve the safety, effectiveness and efficiency of healthcare delivery and to raise awareness in communities across nationwide on how healthcare simulation leads to safer and better informed patient care.

Dickinson chose the topic of maternal health because reducing maternal and fetal mortality rates in Arkansas is one of the issues UAMS is working to address as part of the Vision 2029 strategic plan. the 150th of UAMSe anniversary as Arkansas’ first medical school, and the goal is for UAMS to make Arkansas the healthiest state in the region.

American Health Ranking 2019 Women’s and Children’s Health Report ranked Arkansas 46e out of 50 states for maternal mortality. A 2020 report by the same group that focused on infant mortality ranked Arkansas as 48e place, with 8.2 infant deaths per 1,000 live births.

A stork cake, made by Glasgow, announces the imminent arrival. 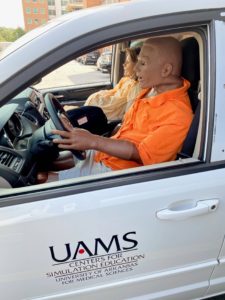 The models portray the frenzied couple as they rush to the hospital.

UAMS’s light tweets told the story of a couple expecting a child as the narrative developed over the week and was illustrated with photos of models in the simulation center. Meanwhile, the tweets also highlighted the high-quality maternal mortality-focused simulations conducted at UAMS, including those led by Faiza Khan MD, associate professor of anesthesiology, and Luann Racher MD, assistant professor of obstetrics and gynecology.

“At UAMS, we have taken the time and effort to develop collaborative teams that work to improve maternal care and reduce maternal morbidity and mortality,” Khan said. She added that anesthesia, obstetrics and nursing teams have collaborated to participate in crisis events, including maternal cardiac arrest, postpartum hemorrhage, emergency cesarean section, eclampsia and seizure. hypertensive, complications of anesthesia as well as other maternal emergencies. 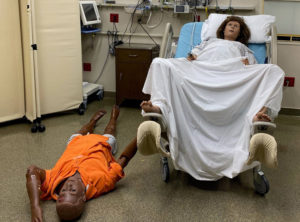 The woman’s partner passes out as she prepares to give birth in this depiction.

Dickinson and the staff at the UAMS Simulation Centers brainstormed the scenario for the theme of the week. Day one of the fun events started with a photo of a cake featuring a stork arriving with a special delivery. The following days showed photos of a pregnant model being driven to a hospital by her distraught partner; Simulation Center staff with the expectant father as he anxiously checks his watch; the mother ready to give birth, her legs in the stirrups, while the baby’s father has passed out near the bed; and finally, the successful birth of the baby, illustrated by the relieved family wearing party hats and sitting around the mother, still in a dress with the baby on their knees.

The family celebrates after the birth of the baby.

“It’s a fun way for our simulation center to showcase the great work being done here by many colleges and departments, but at the same time, it shows the serious side: how educational initiatives within our center are making a difference. , in accordance with UAMS Strategic Plan 2029, ”said Dickinson.

The ideas shared are intended to inspire activities for simulation labs around the world.

“It helps you be part of the community alongside other simulation professionals with common interests and goals,” Dickinson said. “It also gives us the opportunity to raise awareness of our center and our educational programs nationally and internationally. “